RIO DE JANEIRO – It was a cloudy day outside Rio, but the sunshine of the Brazilian people inside the Aquatics stadium shined bright as athletes from the entire globe were cheered on by the energetic crowd. In the stands were 21-year-old Becca Meyers’s parents, who were supporting her as she prepared for the S13 100 butterfly meter.

She was only 17 when she competed for the first time at a high level in the London 2012 Paralympics, but back then, no one knew who she was. She was the newbie, an underdog. Nowadays, she has a target on her back; she’s the one to beat.

Becca’s parents, Mark and Maria, cheer on their daughter from the stands in her preliminary heat. Sept 8, 2016. Photo by Ken King.

Meyers’s parents got more nervous as the night progressed. Her father, Mark, got out of the stands and waited anxiously in the hallway as his daughter was getting into the water. He returned after the race was finished, more tense than his daughter, but Meyers had been more than ready as she’d been waiting for this moment her entire journey.

Her mother, Maria, said that “every fiber of her wanted this; we’re super proud of her,” and that in her mind, Becca knew she was going to make it. That’s why she had been training extra hard for the past year. Her mother recognized the challenges she had overcome.

“She is the only one in the category who is deaf, being the only one who cannot hear the buzzer when it goes off,” she said.“But for her, it’s not an obstacle; she has to rely on the light. It’s the most frustrating part of the race for her.”

Meyers’s strategy came into play when she came from behind after the turn and overtook her challenging competitor Uzbekistani Odilova Muslima halfway through the second leg down. After she took the lead, she achieved the impossible: a gold medal, the title of Paralympic Champion and a new world record in her S13 100 butterfly meter leg with a time of 1:03.25. The crowd celebrated wildly as she entered the victory ceremony, and her mother teared up as the American flag was raised.

Calm but thrilled about her win, Meyers said after the race:“It feels so amazing. I am so excited to win the first gold medal for USA Swimming and we are going to kill it for the rest of the week. I can’t wait to see what everyone else does.”

The night was emotional and the Meyers family has little time to recover from tonight’s victory as Becca Meyers faces the upcoming 50m, 100m and 400m freestyle and the 200m individual medley all in the S13 category.  There may be no one at these Paralympics who can defeat this fighter. 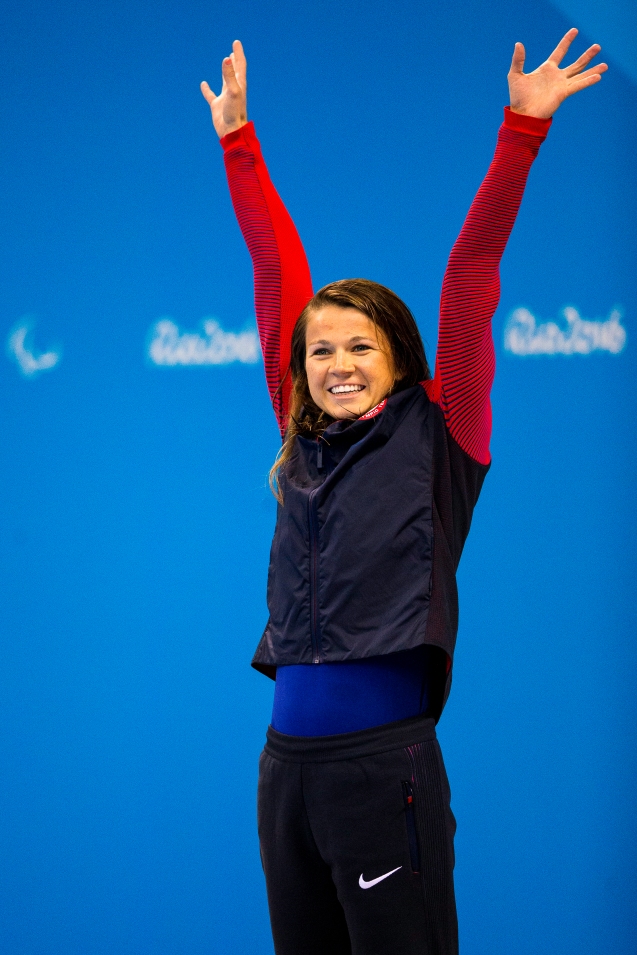 Becca Meyers celebrates her incredible win on the podium last night at the Olympic Aquatics Stadium. Photo by Ken King.