By Mariya Abedi and Orge Castellano

RIO DE JANEIRO, Brazil – It was another cloudy day in Rio, but the U.S. continued to build their medal count on day two of competitions. Six medals were awarded across swimming, cycling and athletics, but U.S. remains in fourth place with 14 medals total.

The U.S. Swimming team saw the only gold medal for the day with McKenzie Coan winning the 50-meter freestyle in the S7* category, beating Germany and Canada with a time of 34.07.

“My secret weapon is about 20 minutes before I have peanut butter with normal Cheerios,” Coan said after winning her first international gold medal. “It sounds weird, but it is really good.” 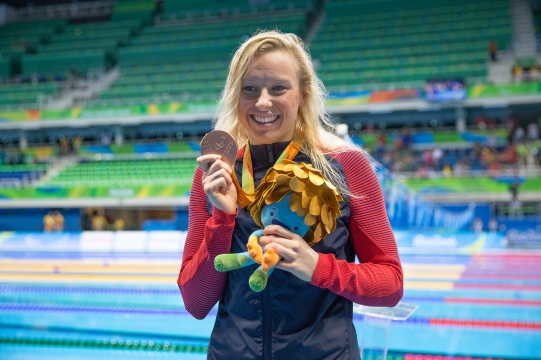 And four-time Paralympian  Jessica Long added a bronze medal to her silver from yesterday for the women’s 100-meter butterfly, missing the silver medal by 0.21 milliseconds. She came in at 1:10.32.

Fellow swimmer Bradley Snyder tied with Poland’s Wojciech Makowski for the silver medal in the men’s 100-meter backstroke in the S11* category with a time of 1:08.28. And Ukraine’s Dmytro Zalevskyi snagged the gold and set a world record of 1:06.66.

Joe Berenyi poses on the medal podium during the victory ceremony for the men’s individual C3 pursuit cycling. Photo by Ken King.

The Illinois cyclist came to Rio to dominate the track in his sprint category. The 47 year old was hurt in a work-related construction accident back in 1994. His right arm had to be amputated as a result.

“It is disappointing to lose in the gold medal round, but to win a medal in my second games is great,” Berenyi said. “It is a result of a lot of hard work; it’s never a bad thing to get a silver.”

Meanwhile, medal-hopeful Billy Lister was not able to qualify at the C1 3000-meter individual race. He crossed the finish line in sixth place, but the journey isn’t over for him yet. He’ll be competing in the C1-2-3 100-meter cycling on September 10th and cycling road.

The men’s goalball team had a great start in their first preliminary game against China. They won 5-2, with only three of the six team members playing the entire time. And women’s goalball automatic won after Algeria forfeited the game.

In men’s wheelchair basketball, Team USA continued to play strong, defeating Germany, 77-52, making their way towards the quarterfinals. They’ll be playing the Islamic Republic of Iran on Saturday.

And several U.S. players passed their first round in wheelchair tennis. Steve Baldwin won 2-1 against Brazil’s Rafael Medeiros in the men’s singles. And Dana Mathewson and Kaitlyn Verfuerth won 2-0 against host country Brazil in the women’s doubles.

In men’s table tennis, China swept the table as they usual do. It wasn’t a surprise for the Americans, who knew they were playing against a fierce competitor. China’s powerhouse player, Ma Lin, beat Tahl Leibovitz, winning the three sets. The entire game lasted under 15 minutes. He won points on 17 serves, while Leibovitz’ won nine.

Host nation Brazil won by wide margin over USA in the sitting volleyball preliminaries, scoring 75 to 45. The U.S. players fought until the very last second, but it wasn’t enough. Team USA can still rebound from the lost match, and there’s still plenty of time to forge ahead in the next couple of days.

*C 1-5 categories refer to those athletes with cerebral palsy, limb impairments and amputations. The classification system allows cyclists to compete against others with a similar level of function.