By Orge Castellano and Mariya Abedi

It was an exciting night on the basketball court as the women’s wheelchair basketball team crushed Germany, the 2012 London Paralympic Games gold medalist. The game finished 62-45 at the Rio Olympic Arena. The game was entirely dominated by the U.S., with four periods played with strong blocks, several straight throws and minimal faults. Their movements were stable and balanced with massive turnovers and dynamic throws. At the end the women clinched gold. 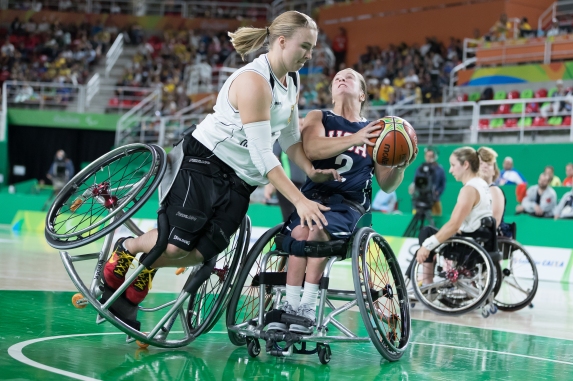 Gail Gaeng blocks Mareike Miller (GER) in the second half of the game. Photo by Michael Clubine.

“I think we were a balanced team. We played with incredible composure offensively and defended intensely. Our ability to play with both composure and intensity carried us through,” said coach Stephanie Wheeler.

Rebecca Murray poised herself as the most powerful player on the court, scoring 33 points throughout the whole match, compared to Germany’s Gesche Schunemann, who only scored 13.

“We knew Germany was going to come out for a fight and that it would be an aggressive game. We knew we had to stay composed and not get rattled because of the aggression, and just stay together,” said Murray. 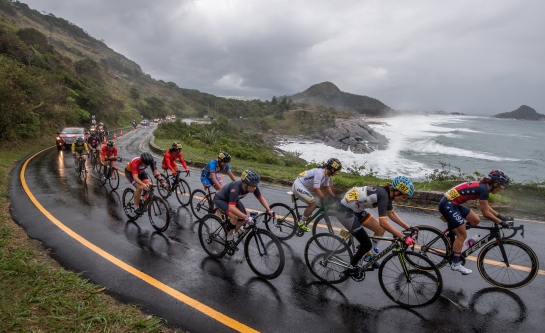 In cycling, Jamie Whitmore took her first gold home at the women’s cycling road race. The 40 year-old finished in a time of 1:30.14 to edge out China’s Sini Zeng and Denise Schindler of Germany.

“I’m feeling fantastic now that I won gold. This has been a life-long dream since I was about six years old and wanting to be an Olympian,” Whitmore said. “I had a very wild pro-career as a triathlete and mountain biker. I thought my dream had ended and then there’s this great thing called the Paralympics, so I got a second chance.”

Jill Walsh, from New York, took part in the T1-2 women’s road race, coming in second in an event that was very challenging and exhausting. It was Walsh’s first appearance at the Paralympics.

“That was hard,” said Walsh. “I could see the number one rider just pulling a little ahead from me. I thought I could make up some time, but my legs were pretty spent by then.”

The final medal of the day on the roads for the U.S. came courtesy of the relay team. Will Groulx, Oz Sanchez and Will Lachenauer combined effort resulted in silver in the H2-5 mixed team relay with a time of 33:21.

Ryan Boyle and Joe Berenyi also competed in the race. Boyle just missed the podium in the T1-2 men’s road race, finishing fourth, and Berenyi finished 10th in the C1-3 men’s road race. Billy Lister was also scheduled to compete, but he had to be pulled out of the race due to a severe fracture he suffered on his left elbow the previous day after crashing his bike on his way to the start line.

The U.S. team will have one more day to add to its medal count as the final day of the road cycling competition gets underway Saturday, September 17th. 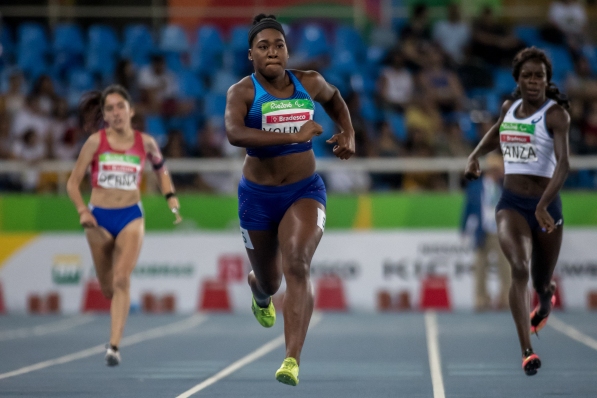 Deja Young competes in Rio on September 15, 2016. Photo by Michael A. Clubine.

In track and field, the gold medals kept on coming. Deja Young won gold in the women’s 200-meter T47 race with her season best time of 25.46. It was the second medal for the first-time Paralympian.

“The first one hasn’t hit me yet, so the second one isn’t going to be in a while either. It’s quite exciting to come out in my first Paralympic Games and compete as well as I did,” Young said.

David Blair won the top for the men’s discus throw F44 with a distance of 64.11-meters, setting a world record after a 16-year hiatus from athletics.

“Before I went into the ring for my last throw, I thought about my return; world record; first place; you’ve got it locked in,” Blair said. “Throw another one for fun, and it was fun.”

Roderick Townsend-Roberts continued the gold medal win in the T47 high jump, with a result of 2.09. And Alexa Halko rounded out the medal count with a silver in the women’s 800-meter T34.

There were tears of joy and celebration on the court after the women’s goalball team won the bronze medal, beating out host country Brazil 3-2. 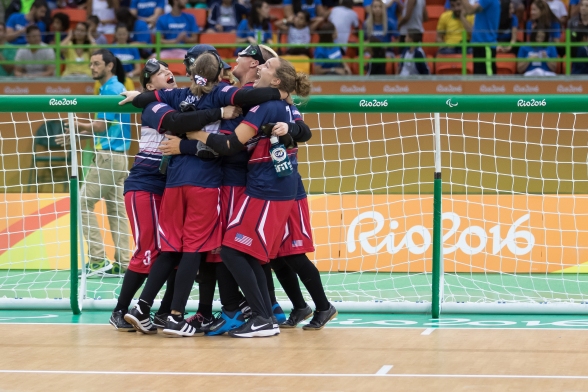 Jen Armbruster blocks a shot in the women´s goalball final match, played in the Future Arena. Photo By Michael Clubine.

Brazil managed to get a ball past the U.S. defense with 3 minutes left in the game, but they remained one point behind. The women’s team came in third place overall, a long way from 2012 London’s games when they placed sixth.

“This is so special because we lost in London, and we were favorites to win,” said Dennis. “This time around we worked so hard to get here; we worked four years to win when it mattered.”

In men’s goalball, Team USA faced fierce opponent Lithuania in the gold medal match. The European team managed to score five times in the first half. By halftime, the score was 5-1. The U.S. team struggled with defending the goal, and Lithuania scored three more times in the first three minutes of the second half.

But with the top two teams competing in the game for visually-impaired players, it was still anyone’s game. The U.S. substituted several players and managed to score 7 points in the second half. But in the end, Lithuania came out on top, winning 14-8. And Team USA came away with the silver medal.

“We’re looking forward to some needed rest. We’ve been training hard for a year straight, no off-season,” said Tyler Merren. “We got to close to where we want to be, but we know the gold is out there.”

“I’d love to hear my anthem, so that’s my goal for next games,” said player Joseph Hamilton. 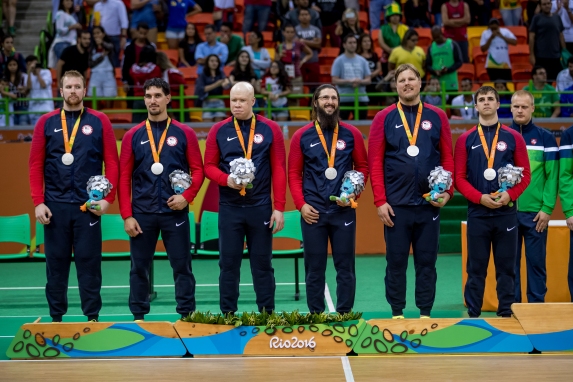 The men’s goalball team at their silver victory ceremony. Photo By Michael Clubine.

It wasn’t good news for the men’s sitting volleyball team. The team played hard against China and even garnered the support of the Brazilian crowd. But it wasn’t enough. China beat them in all three sets. Overall, the U.S. team lost all four of their games in Brazil.

Paralympian superstar Becca Meyers finished her last race in Rio. This time she claimed a silver medal in the women’s 100-meter freestyle S13.

McKenzie Coan, who’s already won two gold medals in Rio, earned her third medal in the women’s 100-meter freestyle S7 final. Her world champion teammate, Courtney Jordan, joined her on the podium again with a silver medal. Jordan was emotionally overwhelmed as she embraced Coan on the deck.

“We are training partners; we spend every day together; she lives two miles up the road; she is my best friend,” Coan said. “Having her by my side pushes me, I don’t know if I would be so fast without her.”

Inside the Carioca Arena, Team USA defeated Japan 57-56 in a very intense physical game of wheelchair rugby, lead by Chuck Aoki, who scored 26 points. They’ll take on Canada in the semifinals.

And after several day of races, two U.S. sailing teams will advance to the medal-contending races, the three-person sonar and the one-person 2.4mR.

In the sonar, the U.S. team has been holding onto second place going into the medal races.  And Dee Smith finished first and fifth. He’s currently in fourth place and only two points away from third place.